We should never take that lightly. Just because it is something many of us have known for a long time – maybe even our whole lives, we must never make light of what Jesus did for us. It was his suffering and pain that paid the price for our sins. God, because He is holy and cannot allow sin, poured out His wrath for our sin on his one and only Son. This is one reason we should be so offended when we hear some take Jesus’ name in vain. When they reduce him to a curse, or even worse just a part of their every day jargon, it is as if Jesus suffering – all that pain and torture he went through for our sins – is for nothing. 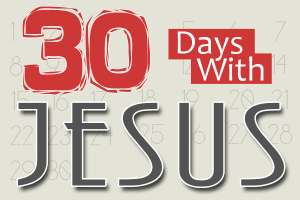 For You. For You. Can you see what He did for you?

For Me. Christ suffered for Me.

By the way, notice that when people are accusing Christ they hear what they want to hear. When they ask Jesus, “Are you the Son of God, then?” his reply was “You say that I am.” What they heard him say was that he was. But that’s not exactly what he said. Though they accused him of saying that. “Why do we need further testimony? We have heard it ourselves from his own lips!” They also claimed that Jesus was telling them not to pay taxes to Caesar, when what Jesus actually said was “Give to Caesar what is Caesar’s and to God what is God’s”

47 While he was still speaking, suddenly a crowd appeared, and the man named Judas, one of the twelve, was leading them. He walked up to Jesus to kiss him. 48 But Jesus said to him, “Judas, would you betray the Son of Man with a kiss?” 49 When those who were around him saw what was about to happen, they said, “Lord, should we use our swords?” 50 Then one of them struck the high priest’s slave, cutting off his right ear. 51 But Jesus said, “Enough of this!” And he touched the man’s ear and healed him. 52 Then Jesus said to the chief priests, the officers of the temple guard, and the elders who had come out to get him, “Have you come out with swords and clubs like you would against an outlaw? 53 Day after day when I was with you in the temple courts, you did not arrest me. But this is your hour, and that of the power of darkness!”

54 Then they arrested Jesus, led him away, and brought him into the high priest’s house. But Peter was following at a distance. 55 When they had made a fire in the middle of the courtyard and sat down together, Peter sat down among them. 56 Then a slave girl, seeing him as he sat in the firelight, stared at him and said, “This man was with him too!” 57 But Peter denied it: “Woman, I don’t know him!” 58 Then a little later someone else saw him and said, “You are one of them too.” But Peter said, “Man, I am not!” 59 And after about an hour still another insisted, “Certainly this man was with him, because he too is a Galilean.” 60 But Peter said, “Man, I don’t know what you’re talking about!” At that moment, while he was still speaking, a rooster crowed. 61 Then the Lord turned and looked straight at Peter, and Peter remembered the word of the Lord, how he had said to him, “Before a rooster crows today, you will deny me three times.” 62 And he went outside and wept bitterly.

63 Now the men who were holding Jesus under guard began to mock him and beat him. 64 They blindfolded him and asked him repeatedly, “Prophesy! Who hit you?” 65 They also said many other things against him, reviling him.

66 When day came, the council of the elders of the people gathered together, both the chief priests and the experts in the law. Then they led Jesus away to their council 67 and said, “If you are the Christ, tell us.” But he said to them, “If I tell you, you will not believe, 68 and if I ask you, you will not answer. 69 But from now on the Son of Man will be seated at the right hand of the power of God.” 70 So they all said, “Are you the Son of God, then?” He answered them, “You say that I am.” 71 Then they said, “Why do we need further testimony? We have heard it ourselves from his own lips!”

23 Then the whole group of them rose up and brought Jesus before Pilate. 2 They began to accuse him, saying, “We found this man subverting our nation, forbidding us to pay the tribute tax to Caesar and claiming that he himself is Christ, a king.” 3 So Pilate asked Jesus, “Are you the king of the Jews?” He replied, “You say so.” 4 Then Pilate said to the chief priests and the crowds, “I find no basis for an accusation against this man.” 5 But they persisted in saying, “He incites the people by teaching throughout all Judea. It started in Galilee and ended up here!”

6 Now when Pilate heard this, he asked whether the man was a Galilean. 7 When he learned that he was from Herod’s jurisdiction, he sent him over to Herod, who also happened to be in Jerusalem at that time. 8 When Herod saw Jesus, he was very glad, for he had long desired to see him, because he had heard about him and was hoping to see him perform some miraculous sign. 9 So Herod questioned him at considerable length; Jesus gave him no answer. 10 The chief priests and the experts in the law were there, vehemently accusing him. 11 Even Herod with his soldiers treated him with contempt and mocked him. Then, dressing him in elegant clothes, Herod sent him back to Pilate. 12 That very day Herod and Pilate became friends with each other, for prior to this they had been enemies.

Jesus Brought Before the Crowd

13 Then Pilate called together the chief priests, the rulers, and the people, 14 and said to them, “You brought me this man as one who was misleading the people. When I examined him before you, I did not find this man guilty of anything you accused him of doing. 15 Neither did Herod, for he sent him back to us. Look, he has done nothing deserving death. 16 I will therefore have him flogged and release him.”

18 But they all shouted out together, “Take this man away! Release Barabbas for us!” 19 (This was a man who had been thrown into prison for an insurrection started in the city, and for murder.) 20 Pilate addressed them once again because he wanted to release Jesus. 21 But they kept on shouting, “Crucify, crucify him!” 22 A third time he said to them, “Why? What wrong has he done? I have found him guilty of no crime deserving death. I will therefore flog him and release him.” 23 But they were insistent, demanding with loud shouts that he be crucified. And their shouts prevailed. 24 So Pilate decided that their demand should be granted. 25 He released the man they asked for, who had been thrown in prison for insurrection and murder. But he handed Jesus over to their will.

Father, help me never to take for granted all that you suffered for my sin. All thanks be to you, not just my thanks, but all the thanks I can offer and then some. Thank you for suffering for me. Thank you that because of your suffering I can know you and be known in you. Thank you that my sin will not keep me from you because you poured out your wrath on your son for me.