Do You Know My Jesus, Part 7: Setting Up Camp 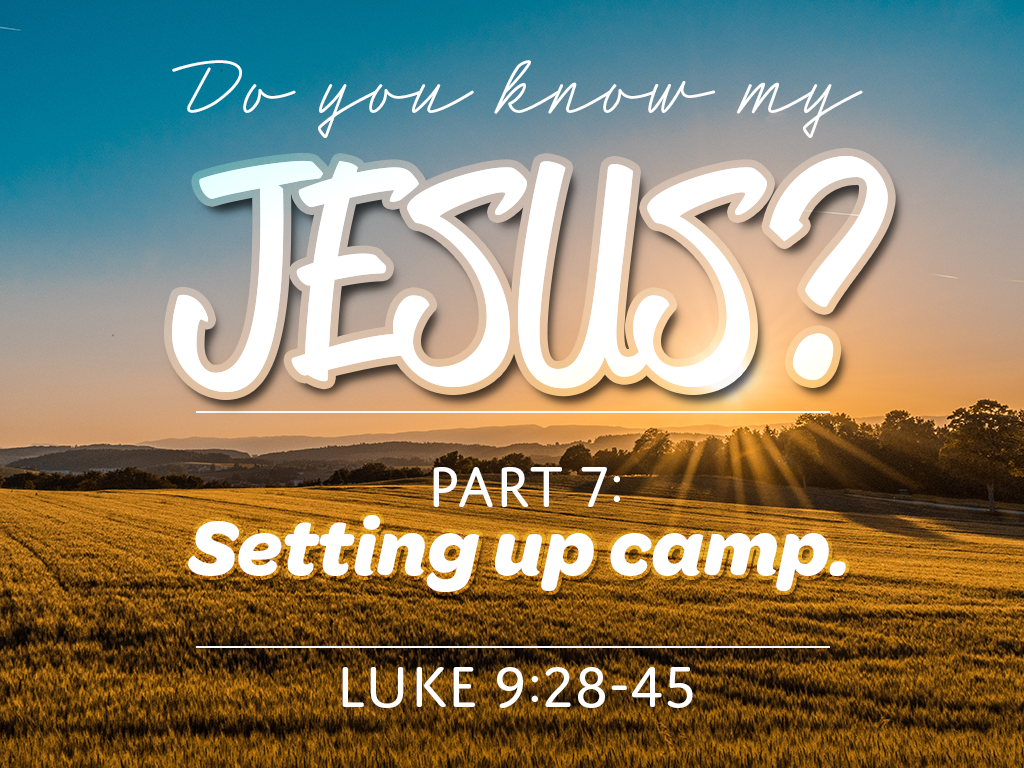 28 About eight days after Jesus said this, he took Peter, John and James with him and went up onto a mountain to pray. 29 As he was praying, the appearance of his face changed, and his clothes became as bright as a flash of lightning. 30 Two men, Moses and Elijah, appeared in glorious splendor, talking with Jesus. 31 They spoke about his departure,[a] which he was about to bring to fulfillment at Jerusalem. 32 Peter and his companions were very sleepy, but when they became fully awake, they saw his glory and the two men standing with him. 33 As the men were leaving Jesus, Peter said to him, “Master, it is good for us to be here. Let us put up three shelters—one for you, one for Moses and one for Elijah.” (He did not know what he was saying.)

34 While he was speaking, a cloud appeared and covered them, and they were afraid as they entered the cloud. 35 A voice came from the cloud, saying, “This is my Son, whom I have chosen; listen to him.” 36 When the voice had spoken, they found that Jesus was alone. The disciples kept this to themselves and did not tell anyone at that time what they had seen.

37 The next day, when they came down from the mountain, a large crowd met him.38 A man in the crowd called out, “Teacher, I beg you to look at my son, for he is my only child. 39 A spirit seizes him and he suddenly screams; it throws him into convulsions so that he foams at the mouth. It scarcely ever leaves him and is destroying him. 40 I begged your disciples to drive it out, but they could not.”

41 “You unbelieving and perverse generation,” Jesus replied, “how long shall I stay with you and put up with you? Bring your son here.”

42 Even while the boy was coming, the demon threw him to the ground in a convulsion. But Jesus rebuked the impure spirit, healed the boy and gave him back to his father. 43 And they were all amazed at the greatness of God.

While everyone was marveling at all that Jesus did, he said to his disciples,44 “Listen carefully to what I am about to tell you: The Son of Man is going to be delivered into the hands of men.” 45 But they did not understand what this meant. It was hidden from them, so that they did not grasp it, and they were afraid to ask him about it.