We are nearing the end of our focused, season of prayer as a church. Of course, that doesn’t mean that we can or should stop praying. In fact, I hope it means that we’ve developed more of a lifestyle of prayer and that we’ll continue on as church in praying for God to show us what He wants us to be doing.

I can’t see the future. I’m sure you already know that. But for some reason, a lot of people think pastors have super-powers like that. And If I could choose a super-power, that probably wouldn’t be it.

Even though I can’t see for sure what’s coming down the road, I do know this: God is at work in our midst. And if the past 16 months have been any indication of what lies ahead, we are very likely going to see God move in some amazing ways.

What has happened in the past 16 months?

Last March we averaged 74 total compared to 95 this year.

Last April we averaged 67 total compared to 132 this year.

Last May we averaged 63 total compared to 105 this year. 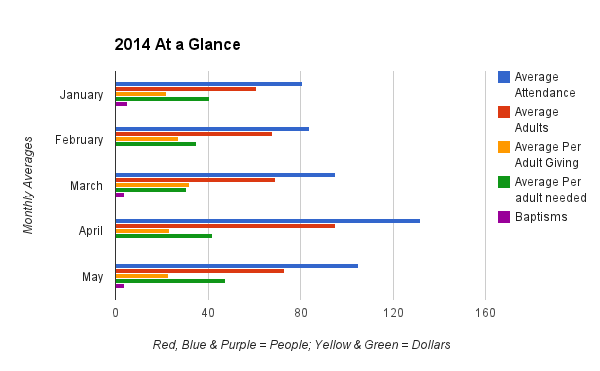 We only baptized 2 people all of last year and we have baptized 13 so far in 2014. There were times last year when we had as few as 2 kids in the whole children’s ministry compared to highs in the 40’s this year. There were other times when we had only 45 adults on a Sunday, we had more than twice that in each of our Easter services.

What does all this mean?

It’s really quite simple, God has given his church a mission of being his “witnesses” to the world. What that basically means is that the world will look at us and based on what they see in us is what they will see of Christ. And just like the witness of a crime is called on to give a testimony about what he saw, we are called on by God to give a testimony of what we have seen.

What then, have we seen?

We have seen the power of a risen Jesus changing people’s lives for eternity. Does that mean the drug addicts are being miraculously healed? Maybe. But, just as we see in scripture, the miraculous turn arounds aren’t the norm, they’re the exception. Do we want to see that? Yes! We’ll take as much of those kinds of stories as God brings to us.

Instead, what we are seeing is the step by step takeover of the lives of those who have chosen to call Christ their Savior. Some have changed quicker than others. Some will take a long time, some will get it right away. Some will get going and fall, others will take longer to get started but stick with it for longer.

Regardless of the time frame, we are seeing God do miracles in the hearts and lives of people who call SixEight church their home.

What’s better is we are seeing more and more people who are connected to someone at SixEight experience Christ through us. That’s what we call 8 to 15. And that’s exactly what we’re supposed to be doing. We’re supposed to live like Christ IN THE WORLD, so the world can WITNESS christ in us. It is through our TESTIMONY of our life being changed and seeing other lives being changed that they will experience the living, breathing God that we worship.

Seriously bro, what does this mean?

It means that as we watch God blessing us and bringing more into our body, we can expect to continue to see God do these and greater things than these in our midst.

“Really, you think we can expect God to do these things.” Absolutely I do. The reason is this: God wants to reach the whole world. He sent His son to die for the Whole World. So, when churches and people really commit to being His witnesses to their part of the world, why wouldn’t he want to see that work thrive.

So, buckle up and get ready for another crazy year. God is going to use us to reach people for His kingdom, to be witnesses to our world and to make disciples upon disciples.

What this doesn’t mean.

The real question is:

SixEight Food Pantry Makes The Front Page of the Columbian