Do You Know My Jesus, Part 6: You Give Them Something To Eat 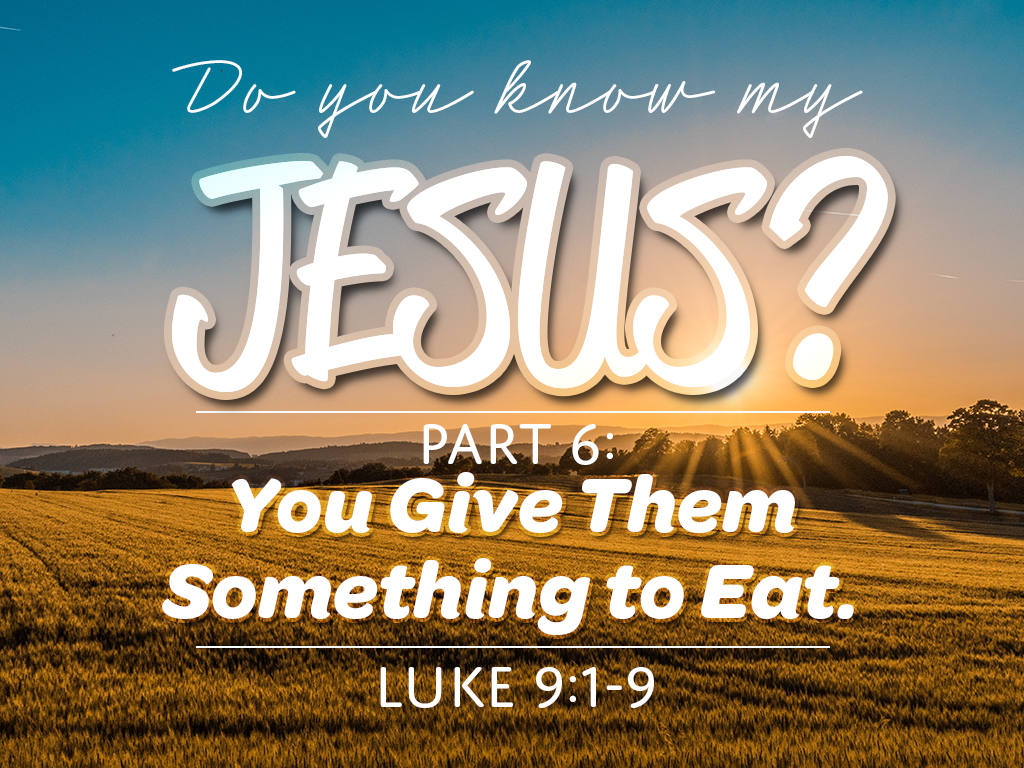 10 When the apostles returned, they reported to Jesus what they had done. Then he took them with him and they withdrew by themselves to a town called Bethsaida, 11 but the crowds learned about it and followed him. He welcomed them and spoke to them about the kingdom of God, and healed those who needed healing.

12 Late in the afternoon the Twelve came to him and said, “Send the crowd away so they can go to the surrounding villages and countryside and find food and lodging, because we are in a remote place here.”

13 He replied, “You give them something to eat.”

They answered, “We have only five loaves of bread and two fish—unless we go and buy food for all this crowd.” 14 (About five thousand men were there.)

But he said to his disciples, “Have them sit down in groups of about fifty each.”15 The disciples did so, and everyone sat down. 16 Taking the five loaves and the two fish and looking up to heaven, he gave thanks and broke them. Then he gave them to the disciples to distribute to the people. 17 They all ate and were satisfied, and the disciples picked up twelve basketfuls of broken pieces that were left over.

18 Once when Jesus was praying in private and his disciples were with him, he asked them, “Who do the crowds say I am?”

19 They replied, “Some say John the Baptist; others say Elijah; and still others, that one of the prophets of long ago has come back to life.”

21 Jesus strictly warned them not to tell this to anyone. 22 And he said, “The Son of Man must suffer many things and be rejected by the elders, the chief priests and the teachers of the law, and he must be killed and on the third day be raised to life.”

23 Then he said to them all: “Whoever wants to be my disciple must deny themselves and take up their cross daily and follow me. 24 For whoever wants to save their life will lose it, but whoever loses their life for me will save it. 25 What good is it for someone to gain the whole world, and yet lose or forfeit their very self? 26 Whoever is ashamed of me and my words, the Son of Man will be ashamed of them when he comes in his glory and in the glory of the Father and of the holy angels.

27 “Truly I tell you, some who are standing here will not taste death before they see the kingdom of God.”