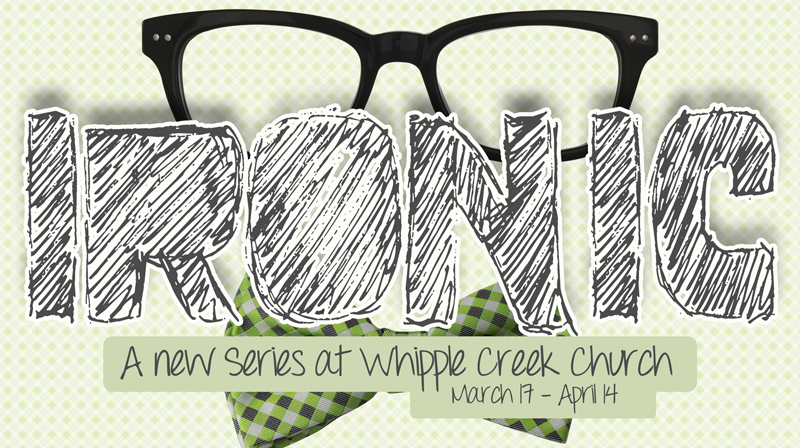 Irony: The use of words to convey a meaning that is the opposite of its literal meaning:
– an outcome of events contrary to what was, or might have been, expected.

Being Ironic: Doing or wearing something with self-conscious humor or for kitsch value, usually refers to an article of clothing worn by a hipster.

Hipster: Trying to be “untrendy” and thinking you have your own style. Anti-trend followers who try to be as obscure as they can in hopes to be perceived as intellectual and unique. In order to be a true hipster, you cannot call yourself a hipster. Identifying yourself as such automatically disqualifies you from being hipster. Being a true hipster is based on denial and self-negation.

So, someone who is trying to be a hipster by wearing the right kind of glasses and a bow tie – isn’t worthy of being called a hipster. They’re not worthy of wearing the glasses. 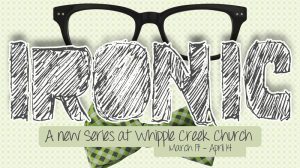 He is the king of all the universes, and yet he was born in the humblest of ways. There was a choir of angels who celebrated and announced his entrance – but they announced it to Shepherds.
He could have lived in a castle, had servants and sent people to die in his place, instead he came not to be served but to serve, to hang out with sinners and to give his life as a ransom for many.
No other king’s life was offered as a sacrifice for others. Every other King in the world that has ever lived, stayed dead when they died. Jesus didn’t.
No other King ascended into Heaven or could even imagine a way they could fill their followers with their presence.
No other King would have left his Kingdom in the hands of commoners. No other king would build a kingdom without walls. No other Kingdom has lasted for over 2,000 years. No other Kingdom will last forever.

If we want to live truly ironic & hipster lives, we should live like Jesus lived. Selflessly, serving and sacrificially. If we want to be untrendy and unlike the rest of the world, the best way to do that would be to live like Christ.

Not that our motivation for being like Christ should be to try to be a hipster. Instead we should be like Christ in every way so people will define us as people who naturally look out for the interests of others, who aren’t concerned with what the world defines as cool and unconsciously live for something outside themselves.

Key Idea for the Series:

“If we’re going to be like Christ, we have to know who He is. When we know who Christ was, how he lived and what he sacrificed, we can’t help but spend our lives trying to live like He lived.”

Key Verse of the Series:

We are all selfish with something (or many things).

What are you selfish with?

Christ gave up everything to serve humanity by giving his life as a Ransom for our sins.

Jesus left heaven, his place at the right hand of the father, the litany of angels and incalculable luxuries to be born in a stable, sleep in a manger and live as a carpenter’s son.

John 1:1-18
1 In the beginning was the Word, and the Word was with God, and the Word was fully God. 2 The Word was with God in the beginning. 3 All things were created by him, and apart from him not one thing was created that has been created. 4 In him was life, and the life was the light of mankind.5 And the light shines on in the darkness, but the darkness has not mastered it.
6 A man came, sent from God, whose name was John. 7 He came as a witness to testify about the light, so that everyone might believe through him.8 He himself was not the light, but he came to testify about the light. 9 The true light, who gives light to everyone, was coming into the world. 10 He was in the world, and the world was created by him, but the world did not recognize him. 11 He came to what was his own, but his own people did not receive him. 12 But to all who have received him—those who believe in his name—he has given the right to become God’s children 13 —children not born by human parents or by human desire or a husband’s decision, but by God.
14 Now the Word became flesh and took up residence among us. We saw his glory—the glory of the one and only, full of grace and truth, who came from the Father. 15 John testified about him and shouted out, “This one was the one about whom I said, ‘He who comes after me is greater than I am, because he existed before me.’” 16 For we have all received from his fullness one gracious gift after another. 17 For the law was given through Moses, but grace and truth came about through Jesus Christ. 18 No one has ever seen God. The only one, himself God, who is in closest fellowship with the Father, has made God known.

Why did Jesus have to come to earth?
The creator of the world, the one who created the light and breathed life into every living creature of both the physical and spiritual world was the only one who could shine light into the darkness. He was the only one that could bring about restoration.

What did Jesus give up to come to earth?

He gave up being the most recognizable person in heaven to be an unrecognizable member of the world he created.

The true light, …was in the world, and the world was created by him, but the world did not recognize him.

“For you know the grace of our Lord Jesus Christ, that although he was rich, he became poor for your sakes, so that you by his poverty could become rich.” – 2 Cor. 8:9

What did Jesus do for us by being born?

We have received from his fullness, one gracious gift after another. What is his fullness? Grace and Truth. What is the gift? To know God in the flesh.

For we have all received from his fullness one gracious gift after another. 17 For the law was given through Moses, but grace and truth came about through Jesus Christ. 18 No one has ever seen God. The only one, himself God, who is in closest fellowship with the Father, has made God known.

Christmas – So What? Jesus left Heaven to come to earth, so? Big deal, what does that have to do with me? It’s not my fault he decided to give all that up. – Well it kind of is our fault.

Christmas – Now What? So, it’s my fault Jesus had to give everything up and come to earth as a sacrifice for my sins. Now what? We have to give up everything to follow Jesus.

At the end of the day or the end of your life, when you’ve spent your lives building the kingdom of you, all that is left behind is the memory of you.

When you spend your lives building the kingdom of God, all that’s left is eternity for those who have believed because of the way you lived.

When you spend your lives, pouring yourselves out into your 8 to 15 in the same way that Jesus poured himself into the 12 (and the 72 and the thousands), you are building a kingdom that will last.

If we spend our lives, focused on the work God wants us to do, we

How do we build the Kingdom of God?

Are we willing to give up everything to follow Christ? If we aren’t, do we really understand all that we have been given in Christ?

I hope we don’t sleep for weeks if that means we finally get the point of being willing to give up everything for the one who is lost.

If we’re really committed to something, we’ll remember it. If something has really gotten a hold of us, it consumes us. When something consumes us, we don’t need to be reminded of it. Every day when we wake up it’s on our mind.

Monday morning brings with it all the worries of our ‘real life.’ This is the litmus test for our faith. If we have really given up everything to follow Christ, when we wake up on Monday morning, the worry that consumes us will be How am I going to serve Christ today.

When we contrast our lives with Jesus’ life, we see just how much Jesus gave and how little we give.

Whatever God brings to you each day, say yes to it.

Christ’s love drove him to the cross.
Where does our love for Christ drive us?

Imagine if we all lived in such a way? (Are you worthy of wearing the glasses?)

instead of having only Christian friends, because that’s what’s most comfortable – I purposefully befriend those who don’t believe to be Christ to them
Instead of saving all my money to buy stuff for me, I give my money away to others.
Instead of never inviting people into my home because it’s a lot of work, I invite them in to serve them.
If we poured ourselves into the 8 to 15 people God has put in our lives for us to reach.
We did good deeds for others for the sole purpose of bringing glory to God? (Not to bring attention to ourselves and get pats on our backs, but to glorify God?)
We got off the bleachers on into the game? What if we stopped watching others serve and started serving with them?

Jesus left everything that was easy and comfortable and entered a world of pain and suffering.

Isn’t it ironic, that we sit today in a country that was founded on Christian principles – that was founded basically as a result of the impact of the gospel, and today we are one of the most “unchurched” countries on the planet.

What is the principle of Jesus’ Birth? Jesus gave up everything to come to earth for to serve us and be a ransom for us. In return, we cannot give enough of ourselves back to him. Total Surrender is not enough.