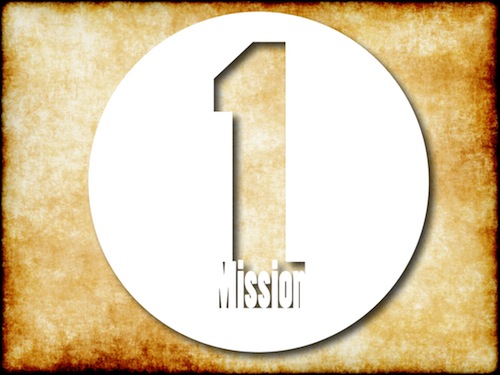 Today we are finishing up the series, One. In it, we’ve covered the three Ones that we want to be about as a church. The one thing – Jesus, Being One Body and our One mission. As we talk today, we cover the topic of our 8 to 15 people that God has put in our life for us to reach. It’s not our job to reach the whole world, just to reach the people in our world.

So they came to the other side of the lake, to the region of the Gerasenes. Just as Jesus was getting out of the boat, a man with an unclean spirit came from the tombs and met him. He lived among the tombs, and no one could bind him anymore, not even with a chain. For his hands and feet had often been bound with chains and shackles, but he had torn the chains apart and broken the shackles in pieces. No one was strong enough to subdue him. Each night and every day among the tombs and in the mountains, he would cry out and cut himself with stones. When he saw Jesus from a distance, he ran and bowed down before him. Then he cried out with a loud voice, “Leave me alone, Jesus, Son of the Most High God! I implore you by God—do not torment me!” (For Jesus had said to him, “Come out of that man, you unclean spirit!”) Jesus asked him, “What is your name?” And he said, “My name is Legion, for we are many.” He begged Jesus repeatedly not to send them out of the region. There on the hillside, a great herd of pigs was feeding. And the demonic spirits begged him, “Send us into the pigs. Let us enter them.” Jesus gave them permission. So the unclean spirits came out and went into the pigs. Then the herd rushed down the steep slope into the lake, and about two thousand were drowned in the lake.

Now the herdsmen ran off and spread the news in the town and countryside, and the people went out to see what had happened. They came to Jesus and saw the demon-possessed man sitting there, clothed and in his right mind—the one who had the “Legion”—and they were afraid. Those who had seen what had happened to the demon-possessed man reported it, and they also told about the pigs. Then they began to beg Jesus to leave their region. As he was getting into the boat the man who had been demon-possessed asked if he could go with him. But Jesus did not permit him to do so. Instead, he said to him, “Go to your home and to your people and tell them what the Lord has done for you, that he had mercy on you.” So he went away and began to proclaim in the Decapolis what Jesus had done for him, and all were amazed.

The Three Priorities of our Body:

1.) One Passion: Keep God at the center of everything.

3.) One Mission: Reach out to the world.

16 Then the eleven disciples went to Galilee, to the mountain where Jesus had told them to go. 17 When they saw him, they worshiped him; but some doubted. 18 Then Jesus came to them and said, “All authority in heaven and on earth has been given to me. 19 Therefore go and make disciples of all nations, baptizing them in the name of the Father and of the Son and of the Holy Spirit, 20 and teaching them to obey everything I have commanded you. And surely I am with you always, to the very end of the age.”